How Comedy Central used Out of Home to Launch a Star 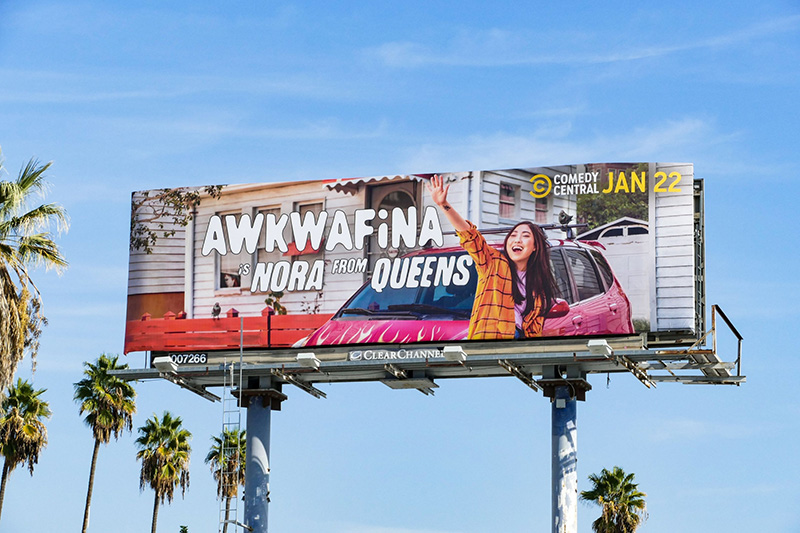 Out-of-Home advertising is having a moment. There, I said it.

OOH not only builds brands but drives immediate short-term action. The entertainment industry has long used OOH to reach audiences and prompt people to see movies or subscribe to streaming channels. The out-of-home media mix is unskippable and unblockable.

In the world of entertainment, competition between studios is fierce. Even with a high demand for good content, selling a TV show to an audience isn't easy and requires almost as much creativity as producing the show itself. And that's why film and TV advertisers turn to OOH. It's a medium proven to deliver massive impact and reach, generating buzz at a rapid rate. There's no shortage of visibility when it comes to OOH, making it the perfect advertising vehicle for big, bold messages.

Speaking of big and bold, Comedy Central had Awkwafina take over as MTA subway announcer in an incredibly fruitful media campaign. 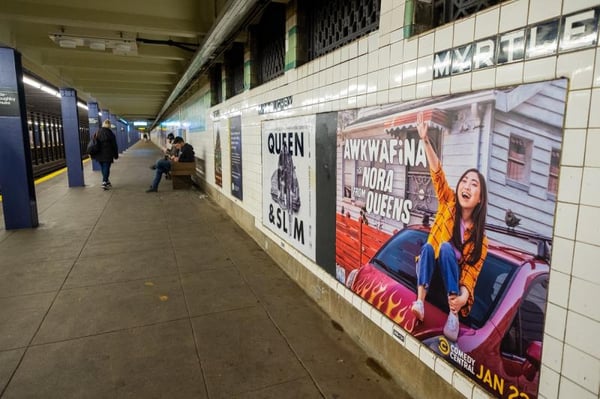 In a particularly cluttered media landscape, media agencies have to be adaptable, creative, and versatile if they're to get consumers to pay attention. To promote the new series "Awkwafina is Nora from Queens," Comedy Central did just that by pulling out all the stops.

Awkwafina (Nora Lum) became a media sensation with breakout supporting roles in "Crazy Rich Asians" and "Oceans 8". She made history as the first Asian-American to win a lead a Golden Globes in the lead actress category for her role in "The Farewell." And now she can add "voice of the 7 train" to her list of accomplishments.

Comedy Central launched a massive multi-platform OOH campaign that would ensure everyone paid attention to their new show by capitalizing on her growing star power.

Audiences expect film and TV show campaigns to be as entertaining as the shows themselves. A media campaign needs to introduce the main characters and create a pre-experience around the show to build audience intrigue.

Comedy Central's objective was to get audiences talking about Awkwafina's new show by building mass social and mainstream media coverage with an impressive unveiling. The idea was to create a fully immersive, multi-sensory, real-life experience of the show that would center on Awkwafina and her story. A great OOH campaign doesn't just get people excited about a TV show; it creates an emotional connection with the story and the characters.

OOH has always been a tool to build awareness. In today's fast-paced world where TV shows are designed to be binge-watched, OOH allows media executives to precisely target audiences to drive viewership.

The most effective OOH campaigns include a mix of all OOH elements, from billboards to transit advertising. The advertising team decided on a combination of transit media and roadside bulletins to be plastered across both New York and Los Angeles. The goal was to excite fans, build awareness and generate some social traffic. So, the advertising team had to go big.

Here's the recipe card for exactly what they did:

New York and Los Angeles are two of the most populous cities in the United States, making them a great market for billboards and other out-of-home media. Therefore, it's a no-brainer that most advertising is centered in Times Square and Sunset Boulevard.

However, the focus of the show "Awkwafina is Nora from Queens" is that the main character is from Queens, New York. As a result, the media campaign chose to center on Queens by having Awkwafina voice the train that ran through the heart of Queens. 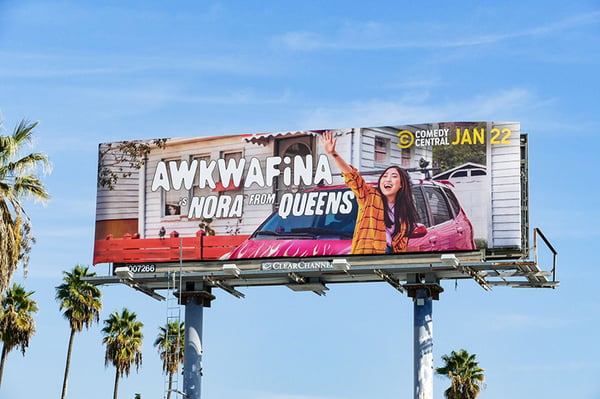 Nora from Queens premiered on January 20, 2020, on Comedy Central. All TV shows have a short release window, which can make standing out a bit difficult. As a result, the advertising had to run a few weeks before the premier to ensure mass coverage and ensure memorability.

By breaking people out of their routine and having Awkwafina voice the 7 train, the advertising team created a compelling real-life experience with targeted, contextual content.

Aquafina is Nora from Queens centers on her experience growing up in Queens, New York. Comedy Central had Awkwafina take over New York City's 7 Train subway line in what was possibly the campaign's most impactful strategy. By becoming the voice of the Flushing 7 line, Awkwafina created a sense of ownership amongst the Queen's audience and contributed to the press around the show.

The innovative stunt involved Awkafina delivering special messages and facts about each stop. The messages included, "This is 33rd street. In other news, 33 is a palindrome. Wait. Can numbers be palindromes?" She also gave directions at the Long Island Railroad transfer adding, "I can't help you once you get to Long Island that's on you" By having a unique message at every stop, the media campaign kept people engaged and generated quite a bit of buzz in the media and on the socials.

Of course, there were separate tune-in pitches for the show, but they weren't the focus of the campaign. The idea was to accompany commuters along the train's 22-stop route and keep them entertained and engaged enough to seek out the show.

The audio ad hit the right notes and proved to be an attention-grabbing activation that attracted national media coverage. One of Awkwafina's distinguishing characteristics is her raspy voice. It's absolutely unmistakable, and as it turns out, her voice was the greatest advertising tool Comedy Central had at their disposal.

For advertising to be truly effective, it must saturate the landscape. Comedy Central used a mix of both transit advertising and giveaways on the day of the premier to saturate the show’s target community in Queens.

In competitive markets such as New York and Los Angeles, OOH is an essential part of the marketing strategy precisely because it offers excellent flexibility; the Comedy Central advertising team tailored the timing and messaging to the location for a more immersive, interactive experience. The traditional media alone garnered over 56 million media impressions.

Engaging OOH campaigns, such as Awkwafina lending her voice to the 7 train, create an experience that is both immersive and shareable. The event was live for about four hours and reached an audience of 81,000 people on social media, further promoting the show. Comedy Central followed up the activation with a sequential YouTube campaign that gave audiences a sneak peek into the show.

The 7 train activation attracted nationwide attention and took social channels and the press by storm, garnering 36 million media impressions and generating $10 million in incremental media value. The campaign was so successful it resulted in 3.8 million views for the show's debut, becoming Comedy Central's biggest premiere since 2016.

As seen from this case study, OOH is the ultimate medium to execute creative concepts and create hype around brands and offerings such as movies and TV shows. Also, investing in OOH is not only an effective way to reach the target audience but also has quite the return on investment.

Want to launch a star of your own?

Combining creativity and relevancy is the key to a successful and effective Out-of-Home (OOH) advertising campaign....

Traditional print, 3D or digital, billboards are the Big Daddy of out of home advertising. But their larger-than-life...