Hunt a Killer is a subscription box game service that's giving folks a major thrill. Their immersive murder mystery game series gives players the chance to test their detective skills honed from too many hours of listening to true crime podcasts and attempt to catch the killer...if they can!

Players sort through realistic evidence, piece together clues, and solve the case in an experience like no other.

Because their game offers an immersive murder mystery like no other, Hunt a Killer didn't want to stick with traditional channels when advertising its latest offering. They wanted their first Out of Home advertising venture to be just as experiential as playing their game. 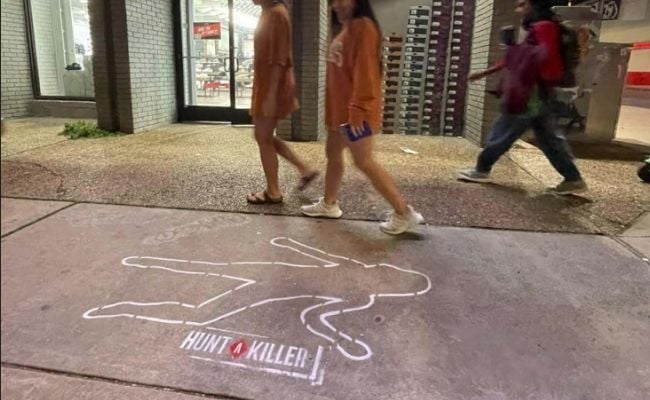 That's why they chose to add Out of Home into the mix and really thought outside of the (subscription) box.

Killing it in Austin, Texas

To promote their latest series, the team combined bold creative, edgy copy and daring community placements across the city of Austin, Texas.

Instead of traditional OOH, the team instead chose to go with strategic, street-level advertising.

The game's tagline "Who Killed Beth?" was posted on wrapped buses to create suspense. A series of posters canvassed the city, teasing Austinites to get excited about the detective experience.

Finally, an illustrated female body outline with the client's logo converted to a stencil was plastered across 75 sidewalks to intrigue any passersby.

Check out this short video to see the effect:

Creating an OOH Campaign with Other Channels

Hunt a Killer's Austin OOH was only part of their campaign They combined these efforts with other target channels in order to maximize the potential ROI.

This is the smart way to go as audiences who see OOH experiences like billboards are 17% more likely to watch related videos online to completion as compared to the audience who did not.

Wanna dig into the numbers? Check out our Playbook, How to beat Facebook with Billboards.