We never set out to launch a startup. This is the story of how we ended up here anyway.

The three co-founders of OneScreen.ai—Greg, Andrei, and I—all worked together at a Boston-based tech startup called HubSpot in its early days. HubSpot is now a large company well known for its marketing and sales software. Back then, even in Boston, most people didn't know the name HubSpot.

In March 2020, as COVID-19 triggered lockdowns and quarantine restrictions, the three of us got together at a small cigar lounge near Boston for a brainstorm and hackathon on ways we could help.

The three of us couldn't contribute in any meaningful way to the efforts addressing the pandemic (other than support Andrei's wife in her work as a hospitalist physician). However, we knew even back then that the economic impact of the pandemic, particularly on small businesses like the cigar lounge where we were sitting, would be severe.

We remembered how, when the Boston Marathon Bombing left many local businesses closed due to damage or investigations, HubSpot and other local Boston companies "adopted" local bars and restaurants by opening a tab for the general public. This was something we felt really good about but other than some positive PR (and a hangover since most of the people who showed up were HubSpotters), it wasn't a sustainable practice for companies to continue.

We wanted to find a way to have that same impact but have it be scalable and sustainable for companies. ROI-positive philanthropy.

(pictured below: the look on my wife's face when I ask her to pose for an investor pitch deck photograph without warning her)

During our discussion, Greg noticed that the large TV hung on the wall spent most of its day turned off. While Andrei and I had remained in tech after leaving HubSpot, Greg had gone into commercial real estate. He told us that malls and other commercial properties he worked with frequently sold ads on such digital displays. I thought Google Cloud would pay a fortune to have been in front of Andrei, who has run large engineering teams in Boston for years. And Andrei noted that there was no way for Google Cloud's marketing team to know he was there, and even if they could, there was no way for them to pay the cigar lounge to access that screen.

During our hackathon, we built a small device that any brick and mortar business owner can receive for free. They just plug it into any digital display in their store (a TV works just fine too) and instantly become part of a content and ad auction network.

Most brick and mortar businesses already show ads, using TVs to stream content from major networks. But none of those ads are relevant to the people inside their store and they don't get any share of the revenue. They actually pay to show ads in their stores.

OneScreen.ai was born to become a modern network that connected every small business together to create an out-of-home content and advertising network. It enables marketers to execute powerful ROI-positive campaigns while funneling their budgets into the local businesses that form the foundations of our communities.

With OneScreen.ai, small business owners can easily execute their own customer acquisition campaigns without spending precious budgets by trading space on their wall for space on someone else's wall—a unit of economic value they've always owned but never been able to spend.

We believe that there are millions of marketers and business owners who could extract enormous value from out-of-home media, but they've never even thought to try. A core part of our vision is to make the out-of-home industry more accessible and more powerful and, in doing so, bring in more marketers who have never even considered how powerful it can be.

Here's the rough draft of the explainer video we're working on for marketers who are new to out-of-home (like we were six months ago):

After developing our prototype, we went into what we half-jokingly called "reverse stealth-mode" and talked to every person we could find in the "Out-of-Home" (OOH) advertising industry. Over the past 20 years, online advertising has built connected ecosystems and grown from $10B to $167B+ in revenue, while OOH grew from $5B to just around $10B. Part of this is simply because OOH hasn't built the connected technology ecosystems and economics models that fueled online advertising's meteoric rise.

We encountered incredibly intelligent and helpful people during these conversations. For the first time in my career working with startups, not one person said that what we were building was a dumb idea that shouldn't exist (seriously, if you ever go into startups, get used to people saying your idea is dumb). Well, some people thought it couldn't exist, but I stopped believing anything was impossible years ago (specifically, when I learned there were new Star Wars movies being released).

Despite the warm reception, we realized that we couldn't simply hand our prototype off to someone else; the OneScreen.ai team worked with an incredible group of advisers and investors to create an end-to-end platform to make this a reality. This is something that should exist in the world regardless. I wrote a long explanation of the economic inefficiencies detailing why, but Greg thought this was too long already and edited it out.

Instead, here's a short video from Greg, Andrei, and I that explains why we are so excited to tackle this challenge (and showing how terrible we are at reading from scripts while recording via Zoom):

OneScreen.ai's mission is to transform the real-world media experience—to enable any screen in any business to be the one screen that can connect a content creator and their ideal audience— in a way where everyone wins.

You might be surprised how much of an impact an additional $300-$3,000 per month can have on a small business. On calls with the first businesses to join our platform, they tell us that it can mean the difference between hiring back an additional employee or even if they re-open at all.

We believe there is an opportunity to create a new, transformative digital experience that makes life better for consumers and content creators everywhere. But our worst-case scenario is that we help small businesses during a time of great need.

Okay, we get this question a lot. What makes Minority Report creepy isn't the real-time personalization of ads, it's the lack of control that people have over their privacy. The man was literally on the run from the psychics, the authorities, and even changed his eyeballs to avoid being recognized by automated technologies!

Consumers are already annoyed by cookies on their computers. Suffice it to say that any marketer who thinks they'll be able to abuse the trust of consumers to the point where they're swapping out eyeballs is unlikely to survive the next ten years as consumers demand control of their privacy, data, and lives.

OneScreen.ai is built from the ground-up for consumers to be able to control exactly how their data is used to power the interactive screens. We'll share more on this in the near future.

I'd like to thank all of the people in the out-of-home industry who have given us such a warm and genuinely helpful reception. I'll be honest—usually, when a startup comes into a centuries-old industry with a grand new vision, they can’t always expect a warm reception. There are people who have been doing good work in this industry for longer than I've been an adult professional. But from the folks at large companies like ClearChannel and Lamar to the folks at tech startups like UpShow, we've been offered nothing but advice, cooperation, and encouragement. 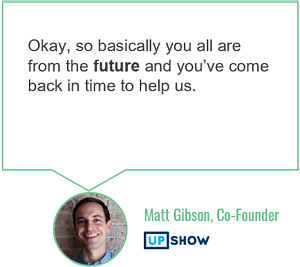 I've spent a career in strategic planning using frameworks like Clay Christensen's "Disruptive Innovation" model or the "Blue Ocean" strategy. Never in my career so far have I encountered an industry with so much potential to grow and so much willingness to endure the burdens of change.

Tim Rowe is one of those people who has welcomed us and given us advice, so I'll leave you with this video of our conversation. Ignore the creepy paintings of aliens in the background behind me, it's a long story.

How Do Smartphones Broadcast Marketing Data?

You don’t need us to tell you that smartphone usage has skyrocketed. This is a fact of modern ...

Why It’s Time to Change Your Opinion of OOH Advertising

It can be argued that out-of-home (OOH) is the OG of advertising. Decades before they got their ...

Don't miss out on new platform features and unique marketing insights, subscribe to our weekly newsletter!