Read how the American Red Cross lifted conversions in just 8 weeks with OOH.

Donated blood saves lives. According to the American Red Cross (ARC), someone in the US needs blood every 2 seconds. Just one pint can save three lives. They should know, since ARC supplies 40% of the nation’s blood.

However, replenishing that supply is a constant challenge, one that requires ongoing efforts to increase awareness and solicit donations.

People "just don't think about it"

Only 37% of Americans are even eligible to donate blood, and only a tenth of them actually do so. Shockingly, many non-donors say they never give it a thought. Facing the worst blood shortage in over a decade, there was an urgent need to get the word out.

In particular, the ARC wanted to target those highly desirable corporate sponsor accounts in and around Phoenix, AZ.

Since there's nothing fresher in the world of marketing than out-of-home, they wondered — could they use OOH to successfully reach their target audience out in the real world? They decided to give it a try.

They chose 17 strategic locations and used a combination of billboard-style media to tell their story — 2 static bulletins, 5 static posters and 10 digital posters. 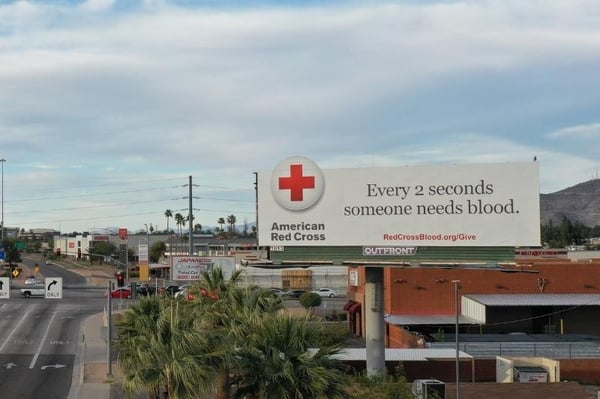 Results that Can Literally Save More Lives

Talk about lift! The ARC's Phoenix OOH campaign generated 22M impressions. During the campaign, web traffic from people exposed to the OOH ads rose a decisive 148%. Those who had seen an ad were also more likely to take action after visiting the site than people who did not see an ad.

That fresh influx of interest was good news, but the best result was the 26% boost in conversions that resulted from the campaign.

Want to learn more about how OOH and ABM are combining forces to boost awareness and drive more conversions? We’ve created a playbook on how to incorporate OOH in your account-based marketing.

New York, LA, San Francisco. They're prime time for OOH marketers because they have very large populations and lots of...

Sales teams are driven by data, and managing all that information can be a time-consuming drag on productivity. That's...