The ROI of OOH

Scrunchie’s “Marketing beyond the Internet” campaign delivers at INBOUND 2022

Scrunchie, the out-of-home (OOH) mascot of OneScreen.ai, was seemingly at every turn at HubSpot's INBOUND 2022, one of the largest marketing conferences in the world. The lovable marketing monster was on a mission to deliver a wake-up call to INBOUND attendees with a battle cry of “Marketing beyond the internet.” The multi-format campaign generated lots of looks from some of the best marketers in the world, as well as impressive results for OOH marketplace provider OneScreen.ai. 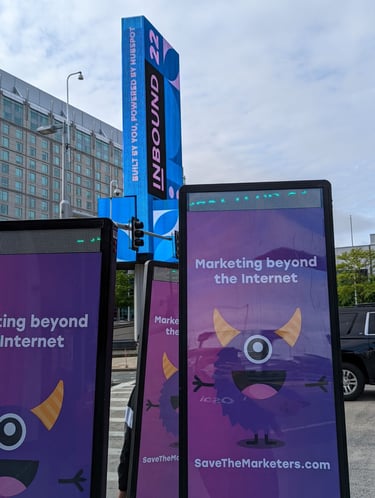 Back in-person in Boston for the first time since the pandemic began, INBOUND was held at the Boston Convention & Exhibition Center (BCEC) from September 6-9, 2022. The beloved conference drew a crowd of more than 11,000 attendees, many of whom are tired of burning their marketing budget on underperforming PPC, paid social, and SEO tactics. A research report earlier this year revealed that while 98% of marketers invest in digital advertising, 97% are looking to alternative channels and 67% say digital returns have diminished even after scaling up programs.

For INBOUND attendees in search of new ideas to boost leads, social media engagement, website traffic, and brand recognition, Scrunchie was there to show the way. There are more options than ever before to integrate brands with the real world while giving marketers the power to highly target prospects and measure impact. Scrunchie proved that there's no better time than now to get out in front of audiences with real-world marketing, and there truly is so much more to the medium than just digital marketing.

OOH advertising is so much more than billboards; in reality, the options are endless. Even in a major city like Boston and during a huge and celebrity-headlined conference, we were able to deploy multiple marketing formats to amplify Scrunchie’s battle cry: 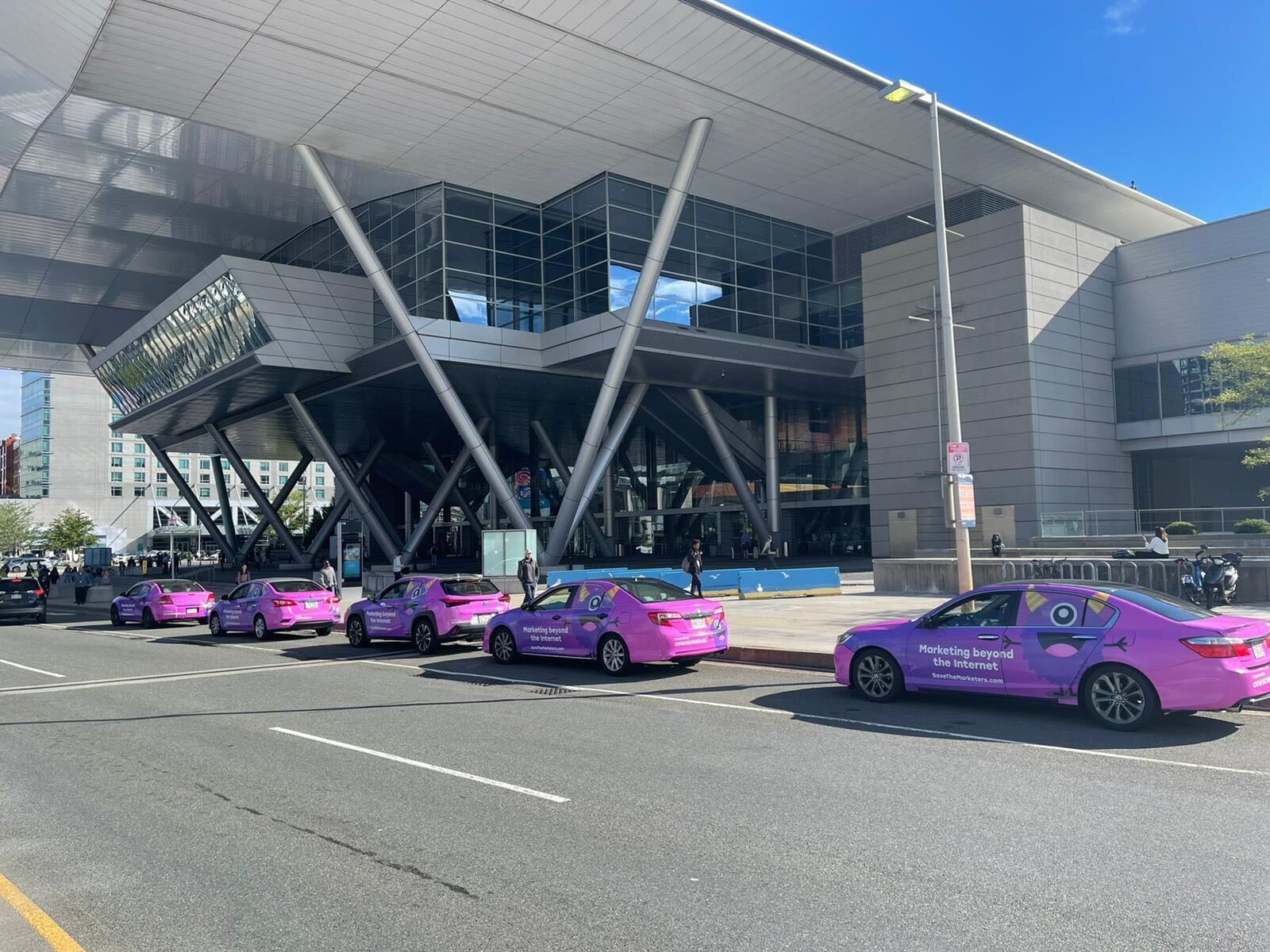 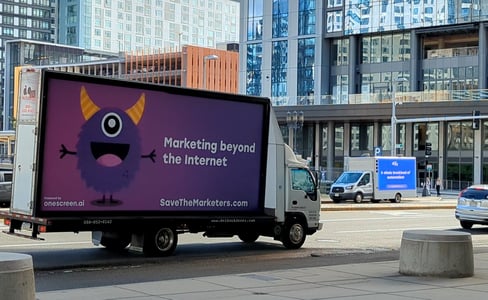 A static billboard truck parked outside of INBOUND

How did the OOH-driven INBOUND takeover perform?

We knew it would take unconventional marketing to get the attention of seasoned marketers. For that, OOH is the perfect medium. But even more than getting attention and generating buzz, OOH produces measurable results. To measure the impact of the campaign, we assessed performance across our website, mobile ads, and social media accounts.

The OOH campaign assets prominently featured the URL “SaveTheMarketers.com” on all creative. Traffic driven to this unique destination is one of many (and simplest) methods to measure the impact of OOH.

During INBOUND, landing page traffic skyrocketed by 506% over the previous week (all landing pages). The campaign landing page garnered 1,411 entrances and a whopping average time per page view of 4.2 minutes. On top of new visitors, 67 existing contacts were influenced by the campaign during the conference and the week after.

In a recent research report, 67% of out-of-home advertisers reported increased social media engagement as an ROI metric for OOH campaigns, and in this area, Scrunchie knocked it out of the park. During the week of INBOUND, OneScreen.ai posted campaign content across LinkedIn, Twitter, and Instagram. 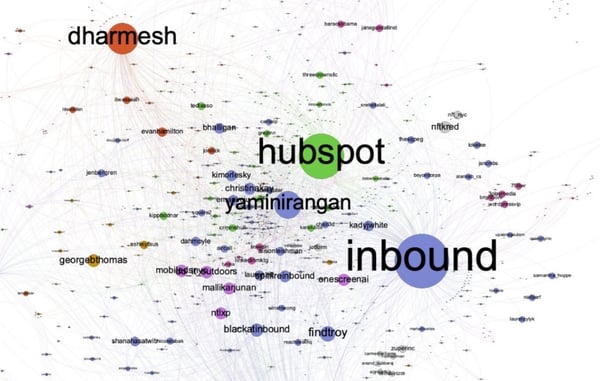 OneScreen.ai, Mallikarjunan and vendor names make it on “Most Talked About at INBOUND"

LinkedIn dazzles across the board:

OneScreen.ai’s top-performing campaign post on LinkedIn generated 3,387 impressions and 1,052 engagements with an engagement rate of 32.3%, and a 29.38% click-through rate. 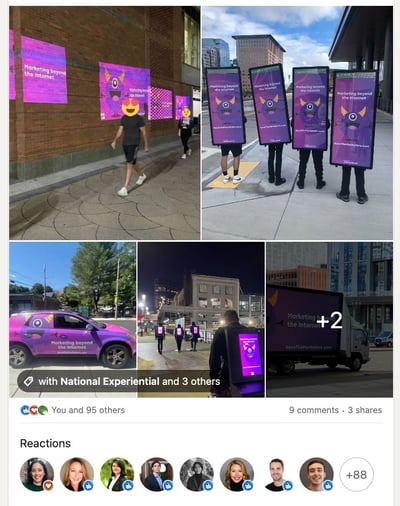 The second highest performing LinkedIn post, a “sneak peek” posted the day before the conference started, grabbed 2,329 impressions and 216 engagements with an engagement rate of 9.8% and a click-through rate of 9.32%.

In total, over the course of the campaign, LinkedIn received 1,344 clicks, 1,550 engagements, and 63 new followers.

For context, LinkedIn has an average engagement rate of just 3.16%. The average click-through rate based on the hundreds of thousands of posts from all around the world on LinkedIn in August was just 7.54% .

During industry conferences, unique event hashtags offer many opportunities for social engagement with attendees. OneScreen.ai’s top “marketing beyond the internet” tweet earned 691 impressions, while another grabbed 555 impressions. In total, the OneScreen.ai Twitter account generated 4,481 impressions and 312 engagements, while gaining a 3.5% increase in new followers. Several OneScreen.ai-related terms even made it on Trust Insight's interactive map of the most talked about at INBOUND.

This mobile campaign targeting people inside the BCEC delivered 899,154 impressions and 672 direct clicks. The click-through rate was +7% higher than the Advertising and Marketing industry average.

OOH gives the engagement boost marketers are looking for

OOH is giving the engagement boost that marketers are looking for to offset the steady decline in digital ad results. In this unconventional conference takeover, OOH delivered on lead generation, social media performance that far surpassed industry benchmarks, and a 5x lift in website traffic.

OOH can be so much more than a vanity play. When done well, it can deliver high-impact executions for a target market and create a unique experience that engages, excites, and educates a specific demographic. OneScreen.ai was able to reach its core audience with unique, eye-catching, dynamic media influencing their actions – all while introducing OneScreen.ai to a brand new audience and driving interest for the OneScreen.ai brand and OOH advertising at large.

Scrunchie's chalking this one up as a win.

Many thanks to our OOH industry friends and vendors who helped bring this incredible campaign to life.

Cozy Earth Gets Comfortable with OOH

Cozy Earth is a high-end online retailer that specializes in luxury bed and bath linens and loungewear for women and...

5 objectives for an OOH campaign

With its broad range of inventory and placement options, OOH advertising is the essence of versatility. That makes it a...

Break out the party hats because today we’re celebrating the birthday of out-of-home advertising!  From manually...